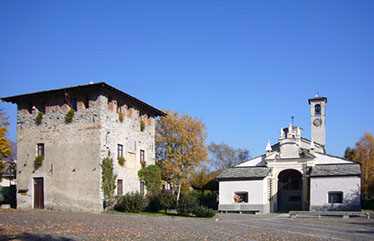 The Black Madonnas, venerated in numerous sanctuaries and cathedrals scattered in every part of the world are amongst the most antique images of the Virgin Mary.

In the small Lanzo temple the presence of the Black Madonna is justified above all for its evident evocation of the traditions of Loreto, which have characterized it from its origins. It is not surprising that the two most famous Marian sanctuaries in Val di Lanzo: the Forno Alpi Grai Sanctuary in Val Grande and the Marsaglia Sanctuary in the Tesso Valley, were inspired by the same representative model.

The diffusion of Black Madonnas in the West came about principally in the Middle Ages. It concerns a type of icon, probably of Middle Eastern origin, where the dark face, apart from the conditions of the environment and the material used, can certainly be explained in symbolic terms. Also the recall of archaic prechristian rituals strengthens the Marian devotion, anchoring its roots to an original spirituality. A religiosity that is remote and yet alive today, nourishing itself on a reality that is simple and natural such as the rhythm of the seasons and the stars that measure time, the miracle of food and life, the mystery of darkness that transfigures into light. All elements that are awaited and invoked for the protection, comforting and merciful, of the Virgin Mother.

The Intermediary from whom shines the beauty of her saving grace. The Sanctuary of Loreto safekeeps a new, precious testimony to the history of Lanzo: the Via Crucis, which up to 1964 adorned the chapel of the Salisian College of Lanzo.

The fourteen stations, in the interpretation of the sculptor Carlo Rapp, are articulated along a continous linear profile, divided in two sections for a total of about twenty-two meters. The work is set out on the outer walls of the chapel along the two sides of the portico and constitutes a significant example of the meeting between art and spirituality

There are car parks near the sanctuary where cars can be left.