The chapel of Saint Mary of the Flagellants 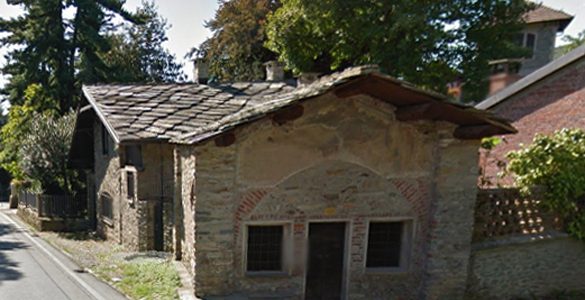 The chapel belonged to the Brotherhood of the same name ‘The Flagellants’, a discipline which was  quite widespread in the Lower Canavese area.

The chapel has a simple facade composed of an arch where a fresco representing ‘The Annunciation’  is still visible.

The architectural characteristics and the position of the building bring to mind its use as a ‘chapel of  rest’ linked to funeral transport from outlying hamlets to the Parish church.

Later the chapel was closed by filling up the space under the arch and an alter was placed inside.

Inside there is an admirable fresco of the Madonna of Mercy who protects with her mantle the brothers in their classic, hooded costumes. One of the brothers is shown in the act of elfflagellating

his back (a widespread discipline in these brotherhoods).

The fresco is signed by Oldrado Perino, probably the most ancient of the painters in the Valleys of Lanzo to have put his signature on one of his works of art.

It is easy to get to the chapel, which is situated in Via Cavour 1, Corio, just before the

This website uses cookies to improve your experience while you navigate through the website. Out of these, the cookies that are categorized as necessary are stored on your browser as they are essential for the working of basic functionalities of the website. We also use third-party cookies that help us analyze and understand how you use this website. These cookies will be stored in your browser only with your consent. You also have the option to opt-out of these cookies. But opting out of some of these cookies may affect your browsing experience.
Necessary Always Enabled

Any cookies that may not be particularly necessary for the website to function and is used specifically to collect user personal data via analytics, ads, other embedded contents are termed as non-necessary cookies. It is mandatory to procure user consent prior to running these cookies on your website.