The church of Saint Bartholomew 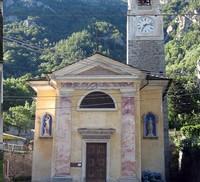 An ancient chapel and bell tower were demolished in order to build this church.

The new sacred building in Neoclassic style is considered to be one of the most interesting in Val Grande.

A painting depicting the ‘Flagellation of Christ’ is conserved inside the church. It was considered to be the work of Daniele Seyter for a long time but was later identified as a copy.

The painting underwent a restoration between 1975-76 at the expense of the Piedmont Region.

The Saint Bartholomew church is in the hamlet of Bussoni to the west of Chialamberto.

There is a small square in front of the church where it is possible to park and then proceed on foot.