The Parish Church of Saint Genesio 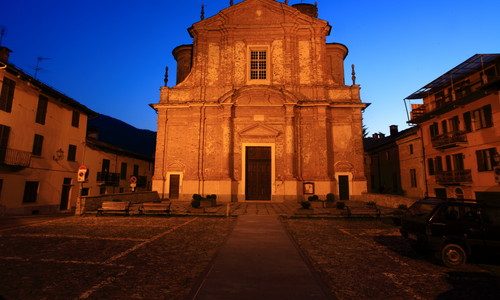 This imposing building was built between 1744 and 1749 to substitute a previous church, demolished in 1742.

The outer walls and bell tower are in brick. Inside there are interesting frescoes to admire, dating from around 1754, which decorate the vaulted ceiling, apse and side altar, showing hosts of angels.

In the centre of the apse a scene represents The Raising of the Wooden Cross.

The altarpiece is of relevant importance with its carved, wooden frame, gilded with gold leaf and which depicts The Crowning of the Virgin.

The main altar, the side altars, the wooden baptistery (made in the 18th century by the Concone brothers) give further merit to the sacred building.

The church is easily reached by all; situated in the centre of the town in Piazza della Chiesa 2.

The car can be left in the square or along the side streets below it.