The Sanctuary of Our Lady of Loreto 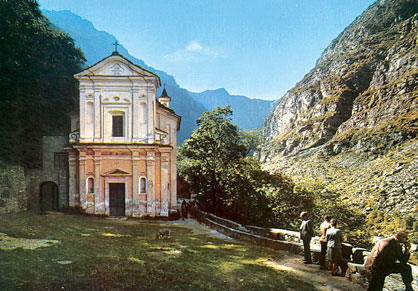 To reach the sanctuary, framed by woods, it is necessary to climb 144 steps but the effort is fully justified by the beauty of this religious complex.

The Sanctuary is situated at Forno Alpi Graie, a hamlet of Grosscavallo at 1340 meters above sea level.

The original chapel was built in 1631 following the wish of Pietro Garino after the appearance of the Virgin Mary in that place.

It was the year 1629 when Pietro Garino climbed, with another two companions, to the top of the Rocciamelone mountain. Near a small chapel built to conserve an icon of the Madonna they found

two small paintings that depicted The Virgin of Loreto and Saint Carlo Borromeo.
Atmospheric agents had damaged these paintings so Garino decided to take them down the mountain and have them restored, with the intention of taking them back to the top. He was originally from Forno but lived in Turin where he entrusted the paintings to a good painter.

By 1630 the plague had spread everywhere and Garino had sought refuge at Forno. He went one day to recuperate the paintings in Turin and, while waiting to take them back to the mountain top,

he deposited them in a chest. With great surpise, Garino later saw the two paintings on the top of a tree. He fell to his knees and, being a good Christian, started praying. It was then that he had a vision of the Virgin Mary.

The Madonna recommended him to tell the parish priest that he should advise all the faithful to be more god-fearing. Only in this way would she be able to stop the plague. Having said that, she blessed him and disappeared. The news of this spread but, not surprisingly, the parish priest asked for more in order to believe. He decided to say mass in the place where the vision had appeared and told Garino to bring the paintings.

Garino that morning took his keys and opened the chest but the paintings had disappeared again. He ran to inform the parish priest but, in the meantime, the local people had started to get excited and somebody had seen the two paintings on the rock of the vision. At this point the people formed a procession and climbed up to honor the Madonna.

After the chapel was blessed in 1632 the number of pilgrims grew and the building wasn’t big enough to receive such a large number of faithful, In 1750 new work was started for a first extension. This work was interrupted and started again in 1843 all the work was completed bringing the Sanctuary to its present state.