The Sanctuary of the Madonna of the Elms 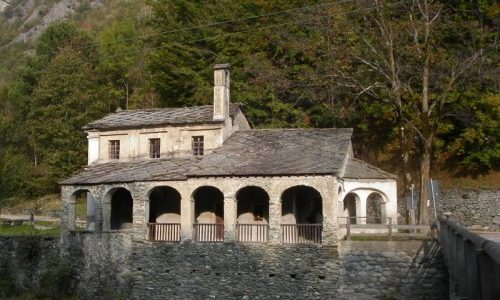 The name ‘of the elms’ refers to the wood of elm trees that grew nearby.
The Sanctuary enjoys an excellent position in the bottom of the valley, not far from the river Stura.
The building dates back to 1738 and is surrounded by an open gallery to protect the faithful from the rain and which, in some places, still has the original cobbled paving and sheer walls going down to the Stura.
Some elements of the structure are characteristics of mountain buildings, for example the roof covered with stone slabs and the white-painted facade.
The sanctuary owes its origin to Bartolomeo Bovero of Germagnano, a good fisherman who, while he was going to fish in the Stura in 1701, apparently saw an old votive pillar dedicated to the
Madonna. He fell to his knees and prayed with fervor for the recovery of his two sons who were seriously ill. After passing the day fishing, he was returning home when he saw his sons running
towards him, both completely recovered. A miracle had taken place.
The first chapel was built in 1721 and the open gallery was added in 1800. Over the years it was restored and improved many times.
In past centuries travellers who passed by the Sanctury during the night (at nightime it seemed a gloomy place) saw strange shadows and presences which gave life to a number of legends.
One legend says that on the day when the festival of the Sanctuary falls – 8th September, a service is held for the deceased. On that day long lines of the dead carrying burning torches can be seen along the road that crosses the valley and the church bell rings without stopping.
The living are not allowed to see this and everything disappears at midnight.
Another legend says that the Chapel of the Elms is a meeting place for the witches of the Viù valley, witches that appear in animal form.

The Sanctuary is located just outside the town of the Chiandusseglio hamlet.

It is possible to leave the car in the parking lot that runs along the provincial road, and then proceed on foot.